The story of the art of Robert van der Touw

Robert van der Touw arrived in New Zealand in 1990 after graduating from the School of Natural medicine in Holland. He always had a strong love for the beauty of nature. Even as a young 4 year old boy he used to wander the Dutch forest.

Shortly after his arrival here he fell in love (literally) with the native forests of New Zealand. As a practitioner of natural medicine, nature was te ‘playing ground’ and New Zealand’s pristine ancient forests could not provide for a better one. Developing a sincere desire to explore all these beautiful ‘new medicines’. As a trained classical homeopath obert was lucky. Homeopathy offers effective research methods to let you explore these.

However it was not till 1993 that he experienced the full power of his passion. “I was on holiday on Mayor Island (Tuhua), a beautiful mystical island full of obsidian. In the middle of the night I felt what the local Maori’s named the ‘Wair

ua’. I was out of control for more than 5 hours. Words cannot properly explain what I felt. What I can say is that because of that experience my whole world was turned upside down”!

After that he started to experience nature in a way he’d never experienced before. It came alive. It became a living breathing entity with the depth of many dimensions.

He involved his students and workshop participants in his research and started writing books describing the medicines of native plants and obviously needed photographs. Heading off into nature with a camera the images, were exceptional, sometimes even stunning.

In photography there is a lot of truth in the saying that ‘beauty resides in the eye of the beholder!’ 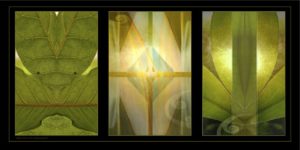 It still took years to develop his art to where it is now. Never giving up his passion. Fifteen years a formula was found that works!

The work of capturing natural patterns within New Zealand’s nature lends itself perfectly for translating those patterns into the home and workplace. Robert loves designing these to suit the individual and enjoys collaborating with architects in this.

As Roberts art is digital the sky is the limit to its application and so watch this space for further delopments to his story.